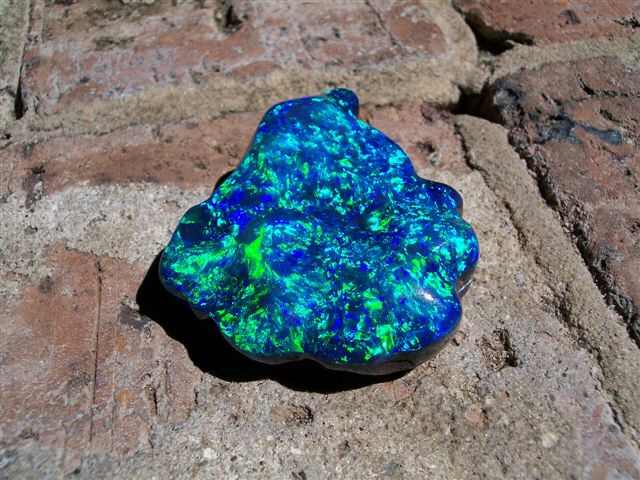 In the past few months I have been approached by two separate opal miners for help in selling two unique but totally different opals. As yet both are unsold and still on the market.

The first started with a customer telling me about a friend who was an opal miner years ago who had a very nice opal for sale. He hadn’t mined for many years so had lost contact with the industry. I gave the customer my number saying I would try to help the retired miner with some up to date contacts if he cared to ring.

I had a phone call from the miner and as with most miners I took what he said with a grain of salt. Most miners when talking about their ‘special stones’ tend to exaggerate. Over the phone he described an opal that just could not exist. I also thought the weight was probably exaggerated as he was guessing.  He hadn’t been to Canberra for over 30 years so he said he would bring it for me to have a look.

A few days later in walked this typical opal miner with a leather string pendant (Tanned kangaroo scrotum pouch). After introductions he took the pendant off his neck and mentioned it contained the crown jewels.

When he emptied the opal out my initial reaction was WOW. The opal was the most exquisite opal I have ever seen. The size was exactly the same as my palm and it was about 3 cm thick. It was a black opal nobby from Lightning Ridge polished except for the back. Predominantly green/blue it had a remarkable pattern and was brighter then most gem grade triplets. This was the best of several stones he found just before retiring. It was so wonderfully beautiful he did not sell it. Now he didn’t want to burden his family with the problem of dividing it after he died.  Consequently he was looking for a buyer. I asked him what he was thinking it was worth. His reply was he was looking for offers of over a million dollars. My opinion is it is worth every bit of that and is amongst the most beautiful things that have ever come out of the ground. I cannot put a picture of it here, but for anyone with money to burn this stone is a bargain.

The second opal came about by a financial guy contacting me on behalf of a client wishing to sell “a spectacular 73 kilo opal”. 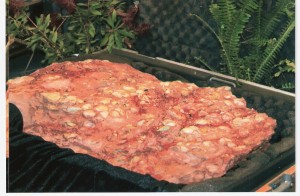 After a couple of e mails it turns out that this opal is a large specimen of opalised shells from Coober Pedy. Over the years I have seen several large groups of magnificent opalised shells. In particular, a few specimens from a small field a little out of Coober Pedy called ‘Shell Patch were memorable. Some of these groups would have weighed at least as much as this latest offer.  I was sent some pictures and accompanying them was a valuation from an opal business valuing the group at 5.1 million dollars. I think they were dreaming and picking numbers at random from a make believe hat but then you only need one fool with more money then sense.

Not to detract from this interesting group of opalised ancient history. It is an unusual specimen and it does have a lot of beautiful shells in it. 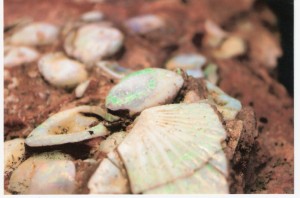 Close up of the shells

It is simply not worth anything close to the valuation. From our correspondence it is obvious the owner knows this valuation is a little fanciful so they would be interested in a realistic offer.

This site uses Akismet to reduce spam. Learn how your comment data is processed.